We breed genuine Australian Labradoodles as part of our family. The dog’s health, good temperament and allergy friendliness guide our breeding work.

A loyal family and hobby dog

Sessans’ ald – Australianlabradoodle is a teddy bear-like, sociable dog. It charms with its appearance and service-minded nature. Other key traits are happiness, energetic and child friendliness.

The Australian Labradoodle is easy to train and is suitable as the very first dog friend in the family but is also suitable as a service and therapy dog. The breed is healthy, long lasting and very human friendly.

Australian Labradoodle’s coat does not shed and therefore may be a suitable option for many people with allergy symptoms.

The Australian Labradoodle has been bred by crossing several different breeds. Despite the relatively young age of the breed, its development has been controlled and tightly regulated, so this breed has its own, clearly identifiable and predictably inherited characteristics.

The Australian Labradoodle is not the same as the Labradoodle, which is a mix of a Labrador Retriever and a Poodle. Labradoodle combines the characteristics of both breeds, the spectrum of which may be very unpredictable in later generations.

> Get to know the breed

The purpose of developing the Australian Labradoodle was to create a suitable and healthy dog breed for people with allergy and asthma symptoms that would also have the characteristics of a guide dog. An excellent assistance and therapy dog quickly learns his own tasks.

For this reason, it is also a great choice for the very first dog. The breed is energetic, friendly and goofy. The Australian Labradoodle thrives in the company of its people and is happy to be involved in all the hustle and bustle of the day, making it an excellent family dog. This breed requires a lot of exercise and interesting things to do.

Many Australian Labradoodle owners think the best thing about the dog is that it is suitable for most allergy families because it does not leave hair. Many people with allergies have been able to live completely without symptoms with this furry friend. If you would like more information, we at Sessans ald – happily help.

Healthy dog from a registered breeder

The breed has quickly become popular with dog owners. This has also fed certain nasty side effects as many have tried to benefit from the good reputation of the Australian Labradoodle with their self-developed mixed breed litters.

Due to high demand, our puppy queue is congested. However, the waiting time is not long compared to how much joy your own dog will bring you for the years to come.

Puppy line closed. Thank you for contacting us and we will get back to you in the coming days.

Aiming for a happy dog!

Sessans ALD is using the Puppy- Culture method because it supports the growth and development in an optimal way and gives the best starting point for the puppies. Also we use Bio Sensor program which supports the development of the dogs nervous system in an ideal way. 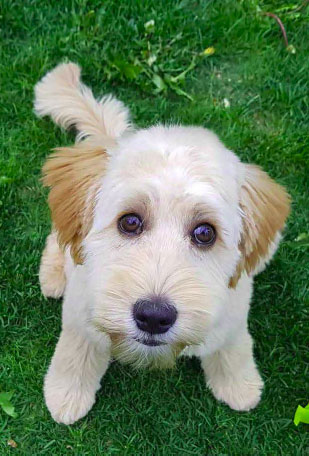 It is said; when we sleep, we sleep best with those we love close to us ❤️

”If i lay down like the llama toy, they won’t probably notice me chilling so hard, right!?”